REVIEW by Iridium Rock and Metal reviews. Check it out!

JOHN NORUM releases his NEW single ONE BY ONE from the upcoming album GONE TO STAY.

JOHN NORUM is mostly known as the founder and lead guitarist of Europe, the rock band that quickly took the name as Sweden’s biggest rock export with the songs “The Final Countdown”, “Carrie” and “Rock the Night”, and has sold over 15 million albums worldwide.

Today he’s releasing the new single ONE BY ONE, a song that features Åge Sten Nilsen (singer in Wig Wam) on vocals.

This is the third single from his upcoming 9th solo album titled Gone to Stay which is set for release on the 28th of October.
Like the two previously released singles from the album, Sail On and Voices of Silence, this one is also accompanied by a music video directed by award winning director Patric Ullaeus from Revolver Film Company.

ONE BY ONE is out now on all music streaming services
LISTEN / DOWNLOAD
(GAIN / Fifth Island Music)
https://orcd.co/johnnorum-onebyone
BUY
https://www.amazon.com/dp/B0B61YCLVH 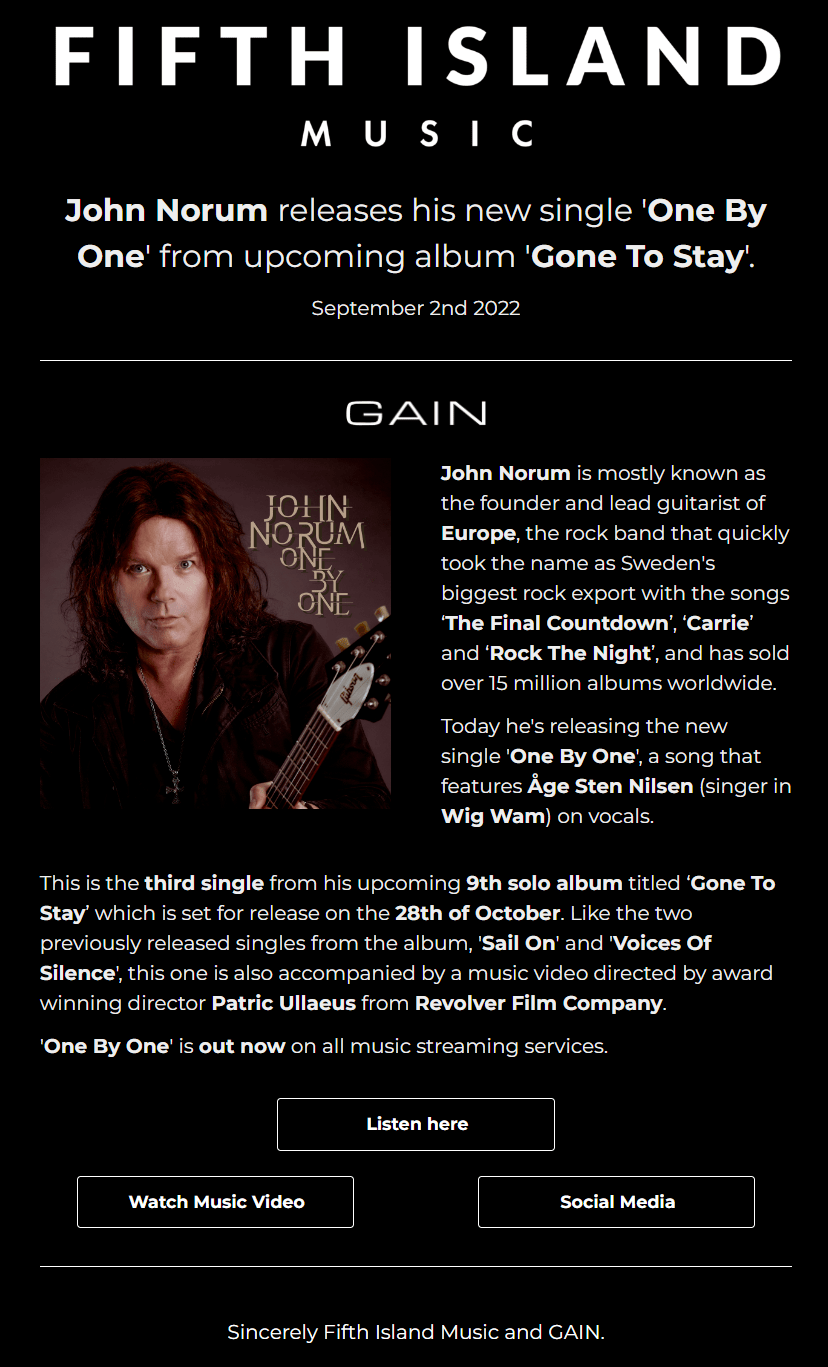 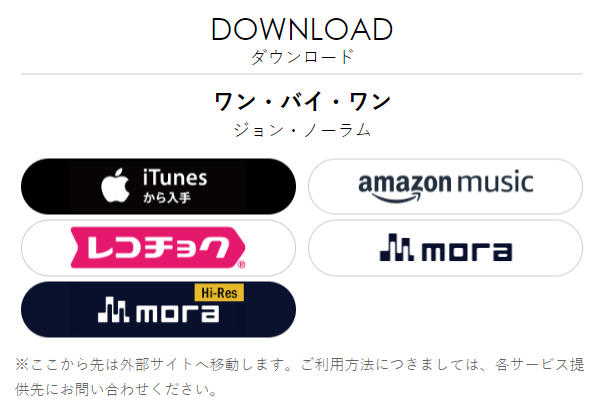 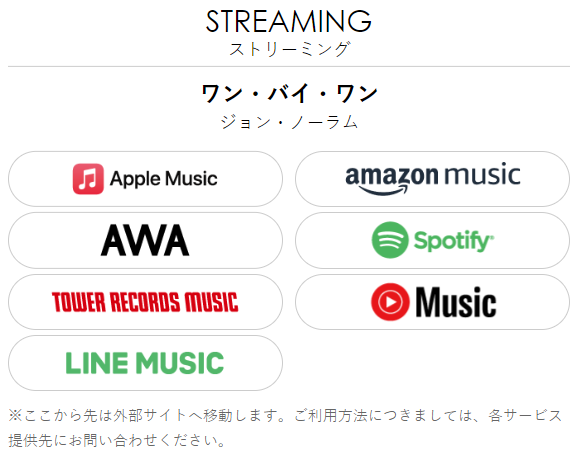 ONE BY ONE – LYRICS
I don’t miss you anymore
The feeling’s gone, won’t kill the pain.
There’s a time, can’t stand up to you
Ain’t throwing stones at your window
So I can bring us back to life.
Live the life, face the truth
Yesterday I got over you.
One by one, two by two
I took a picture of you.
I held it up to the light (yeah) JOHN NORUM is set to release his NEW single ONE BY ONE on September 2nd, the THIRD single from his upcoming album 𝗚𝗢𝗡𝗘 𝗧𝗢 𝗦𝗧𝗔𝗬.

Mostly known as the founder and lead guitarist from the rock band Europe, a band that quickly took the name as Sweden’s biggest rock export with the songs “The Final Countdown”, “Carrie” and “Rock the Night”, and has sold over 15 million albums worldwide.

Furthermore, Norum has collaborated with many well known musicians such as Don Dokken, Marcel Jacob and Glenn Hughes to name a few.

John Norum is now set to release his 9th solo album titled “GONE TO STAY” on the 28th of October, and two singles from the album have already been released, “Sail On” and “Voices of Silence“.

This Friday the album’s third single “ONE BY ONE” will be released, a song that features Åge Sten Nilsen on vocals. Like previous singles from the album, this one will also be accompanied by a music video directed by award winning director Patric Ullaeus from Revolver Film Company.

“ONE BY ONE” will be out on all streaming platforms this Friday, September 2nd. 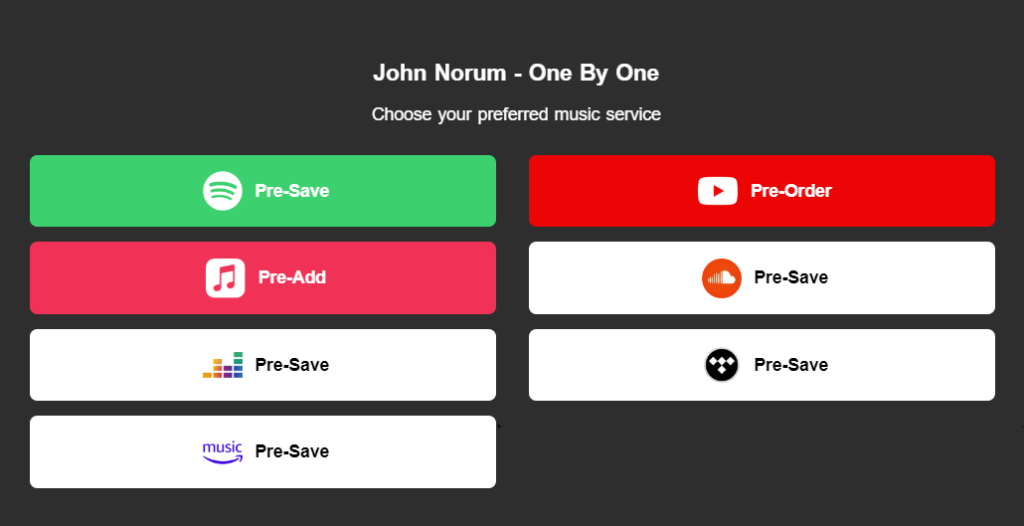 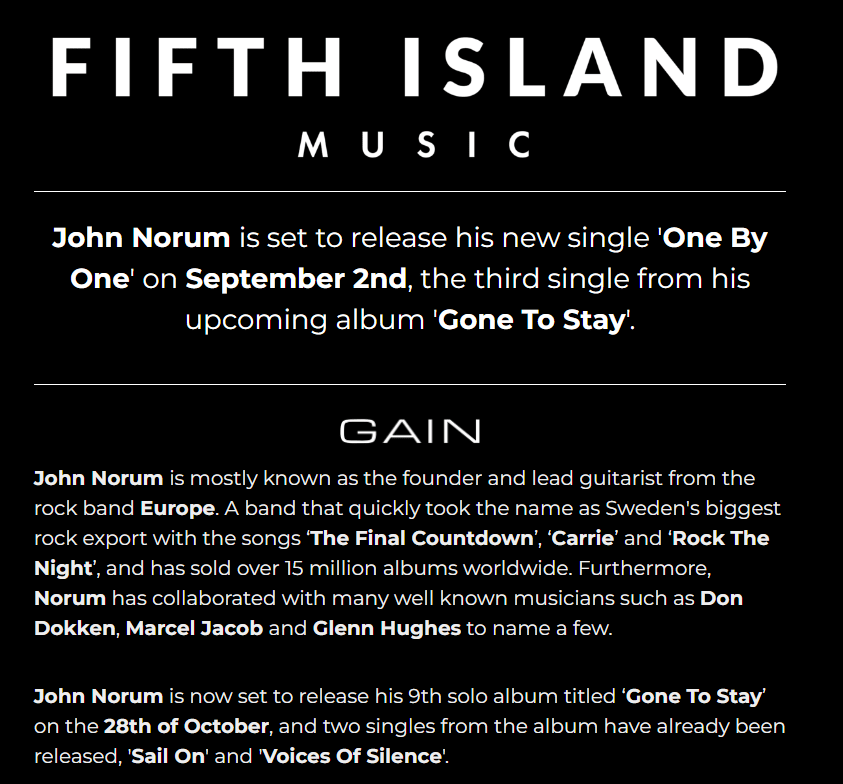 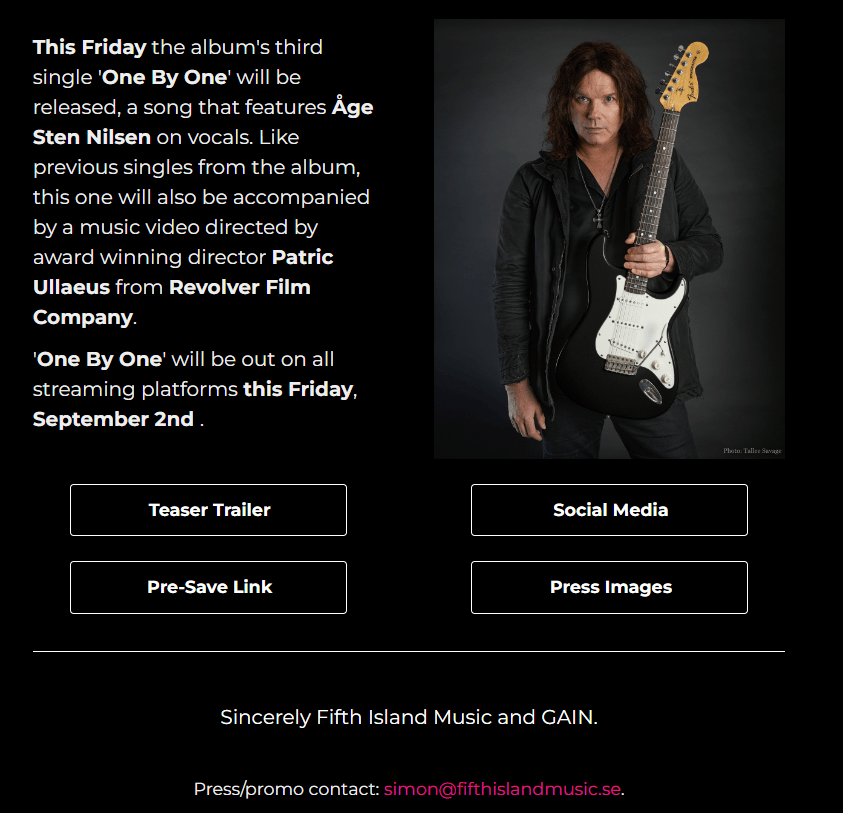 2022-09-02
Previous Post: NEW SINGLE and MUSIC VIDEO from GONE TO STAY solo album coming
Next Post: ONE BY ONE music video – 50K views