“No effects whatsoever… It’s all in the fingers, yes!” (John Norum) 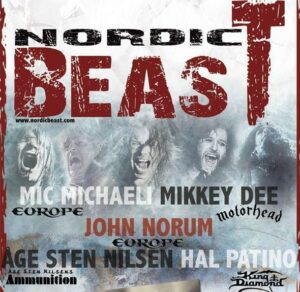 Press release – November 21st, 2013
NORDIC ROCK GIANTS FORM NEW BAND – NORDIC BEAST!
An all-star band with members from EUROPE, KING DIAMOND, MOTORHEAD and WIGWAM
Mikkey Dee (Motörhead), John Norum (Europe), Åge Sten Nilsen (Wigwam), Hal Patino (King Diamond) and Mic Michaeli (Europe) in the same band to Hardrock fans all over the world, it may seem like an unrealistic dream. But have we got news for you. All parties have now confirmed the new collaboration, and the dream team has already made their first ever concert announcement. January 31, 2014, NORDIC BEAST will be unleashed at Rockefeller Music Hall in Oslo, Norway.
NORDIC BEAST insists that their newly formed band will not interfere with their main bands’ activities. But doesn’t rule out that NORDIC BEAST will write original material at some point. Until then the band will offer a kick-ass live set containing the very best from their individual careers with Motörhead, Europe, Wig Wam, Dokken, John Norum Solo, King Diamond and a lot more.
NORDIC BEAST are: